An Open Letter to all National Governments, the European Union, and the International Community 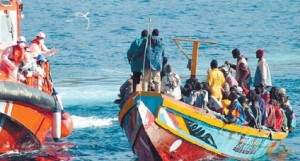 We, members of ENOC as Independent Children’s Rights Institutions, express our deep concern and grief regarding the mass tragedies unfolding in the Mediterranean, where hundreds of migrants, including children and their parents, have and continue to perish.

These too frequent tragedies provoke not merely mass expressions of shock and grief, but also an increasing awareness of the primary and ultimate role of National Governments, the EU and the International Community: to promote and protect the rights of people, especially of those who are most vulnerable.

More often than not, migrants leave their homeland out of despair, ready to face perilous journeys to reach a better place.  In so doing, many children, women and men are meeting their death.

National Governments, the EU and the International Community have a moral and legal obligation to facilitate the access of migrants to their human rights. This is not a passive duty from which anyone can absolve themselves by waiting idly for migrants to seek asylum, especially when so many migrants are dying before reaching their destination.

It is clear from the magnitude of the migration phenomenon that National Governments, the EU and the International Community must respond proactively to save the lives of people on the move and should reconsider their international and foreign policies in order to assess and prevent massive fleeing of people, including children. We would like to reiterate the 2013 ENOC Statement on Children on the Move, which states that “children on the move are children first”. In this context the members of ENOC strongly stress the need for full compliance of existing laws, policies and practices with the UNCRC and other relevant International Human Rights Instruments which ensure the protection of all children. Children are entitled to, at the very least, the right to life, survival and development as well as to protection from any form of harm.

The resources required to take proactive action outstrip what any single country can do on its own. It is clear that structured co-operation amongst countries through National Governments, the European Union, and the International Community is the only way in which each country can fulfil its obligations to protect and support people and children on the move.

Constitutions are premised on the principle of the inherent value and dignity of human life. Tragedies like those unfolding in the Mediterranean violate this principle.  Acting proactively and collectively to save the lives of migrant persons, including children, is the least we can do to uphold the integrity of nations united by a common belief in the primacy of human rights.