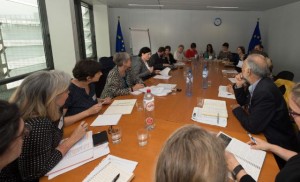 Ms. Vĕra Jourová, Commissioner for Justice, Consumers and Gender Equality initiated earlier this year a regular dialogue with civil society and international organisations on the protection of children in migration with a 1st meeting taking place on 4 February 2016. ENOC was represented at the February meeting by the former Chair, Mr. Marc Dullaert, who on the same occasion presented the findings of the first report of the ENOC Task Force on Children on the Move, released at end of January 2016.

The 2nd meeting of the Commissioner-civil society/international organisations dialogue on children in migration took place on 13 June 2016 in Brussels. At the invitation of the Commissioner and along with 14 other international governmental (ICRC, IOM, OHCHR, UNHCR, UNICEF, etc.) and non-governmental organisations (Missing Children Europe, PICUM, Terre des Hommes, Save the Children, etc.), Mr. George Moschos, Deputy Ombudsperson for Children’s Rights, Greece and member of the Bureau, participated in the meeting on behalf of ENOC.

In his short speaking slot, Mr. Moschos put a focus on the following areas:

–      The need to further enforce the implementation of child protection principles by member states when dealing with   children on the move;

–      The need to constantly collect comprehensive data & to secure monitoring mechanisms on the situation of children on the move in all member states, using the services provided by independent authorities for human/children’s rights;

–      Reiterated the recent calls for action launched by ENOC in its recent letters addressed to EU and national authorities and especially the last one from April 2016 calling for an additional provision for the relocation of a large number of unaccompanied minors.