In the spirit of the International Convention on the Rights of the Child, the ENYA “Let's Talk Young, Let's Talk About Violence!” child participation project aims to give children and young people in Europe the opportunity to raise their voices on the issue of violence, but also to spread their voices in the medias using the modern tools of communication.

The project focused in 2015 on ENOC’s working theme addressing the issue of violence against children. In the future, the project can be adapted to other thematic areas.

The main purpose remains the one of allowing children and young people's participation in the public debate from which they are excluded simply because they are children. Raising awareness of the rights of the child in general and providing citizenship education on the use of  modern media tools (written and audio visual press) such as the web, the radio,the TV etc are the main goals pursued by this year's child/young people participation project

Eleven ENOC member institutions (Ombudspersons for Children's Offices) participated in the project. Participating children and young people (aged 10-18) within the 11 jurisdictions have been provided with the opportunity to interact with professionals from the media sector (written and/or audio visual press) and later on with access to all the modern tools of communication (audio, video, web, radio) where they had the liberty to present, in the media format they have chosen, their work on the theme of violence against children. Thus, children and young people from different countries/regions tackled different aspects of 'violence' covering a wide range of issues such as cyber violence and sexting, violence in school, gender based violence, psychological violence and social isolation, witnessing domestic violence, ignoring or spiteful attitudes towards the visually impaired, and others.

At a 2nd stage of the project, participating children and young people from each country/region have nominated one young representative who presented the work of his/her group on the occasion of an ENYA Forum that took place on 28-30 June 2015 in Athens, at the same time as the ENOC 2015 working seminar. The purpose of the ENYA Forum was to provide space to participating children and young people to present their country work, and to exchange views on their country experiences but also to learn from each other about pressing issues and needs for addressing effectively violence against children. The work of children and young people was also reflected at the ENOC statement on violence against children adopted on 24 September 2015 in the Hague.

As an outcome, a ‘5 minute video was produced by each country/region showing the process of reflection of children starting with the gain of information and exchange of views to their actual participation in the national medias. All the ‘5 minute video shots were edited in a final video and presented for the first time to ENOC members and other attendees on the occasion of the 19th ENOC Annual Conference in Autumn 2015 in Amsterdam, Netherlands.

All ENOC members are invited to engage in the dissemination of the documentary in their respective countries. The ENOC Bureau is currently processing  with its  dissemination to the European Union, the Council of Europe, the Commissioner for Human Rights, European agencies and other European organisations. 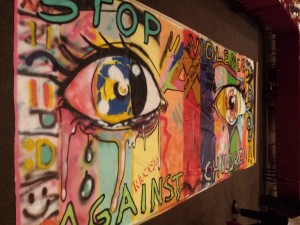