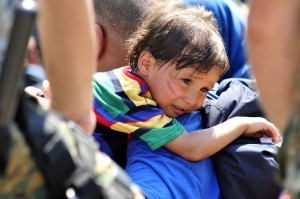 On the occasion of the Council of Europe High-Level Conference “Reaching the heights of the rights of the child“, launching the new Council of Europe 2016-2021 Children’s Rights Strategy, that took place on 5-6 April in Sofia, Bulgaria, ENOC released a letter addressed to EU high authorities expressing serious concerns regarding the safety and the protection of the rights of children on the move in Europe, following the 18.03.2016 agreement between the EU and Turkey. While there is no direct reference to children and the protection of their rights in the agreement, ENOC remains particularly concerned by the unprecedented situation of unaccompanied children on the move in Greece and calls for an additional provision for the immediate relocation of a large number of unaccompanied minors. The letter also re-calls on competent EU authorities to initiate a comprehensive European Action Plan for Children on the Move including key areas and reminds obligations deriving from the UN Convention on the Rights of the Child and other international human rights instruments. Last but not least, ENOC urges the EU to pay due attention and consideration to the particularly vulnerable situation of children on the move in Europe by adopting more concrete guidelines regarding the treatment of unaccompanied children.